When you look at a marathon runner next to a powerlifter, you can’t help but think that there must be a fundamental genetic difference between them. You may be right! At the most elite level, the ACTN3 gene impacts athletic performance due to changes in the type of muscle fiber.

This article digs into the research on the ACTN3 gene, including research on athletic performance, cold adaptation, metabolic health, and aging. Don’t want to read the background studies? Jump ahead to check your genetic data for the ACTN3 gene.

What does the ACTN3 gene do?

A common genetic variant in the ACTN3 gene causes about 20% of the population not to produce fast-twitch skeletal muscle fibers.

First, let me give you a quick overview of how muscles work, and then I’ll go into the research studies specific to the ACTN3 protein.

Skeletal muscles attach to your bones and help you move and stabilize your joints. In addition to movement, your skeletal muscles also stop movement, resist gravity, and other forces. They are constantly working, even when you are still.

Here’s a quick video on how actin and myosin work in the muscle:

Zooming in further, there are several types of actin proteins, one of which is coded for by the ACTN3 gene.

One study explains: “The expression of α-actinin-3 protein is almost exclusively restricted to fast, glycolytic, type 2X fibers, which are responsible for producing ‘explosive’, powerful contraction”.[ref]

This type of explosive, powerful muscle contraction is needed in power sports such as:

What happens if you don’t have the ACTN3 protein?

Researchers created a mouse strain that lacks the ACTN3 gene to learn what happens with ACTN3 deficiency.

They found that mice without the ACTN3 protein could run about 33% longer (similar to a long-distance runner). Most of the other parameters were the same for the mouse muscles, but the researchers did find the twitch half-relaxation time of the ACTN3-deficient muscles was 2.6 ms longer.[ref]

What about in people? A fairly common genetic change in the ACTN3 gene causes some people not to produce the ACTN3 protein. This variant is referred to as R577X.

The ACTN3 XX genotype in studies refers to people who have the non-functioning ACTN3 gene, which means they do not produce the ACTN3 protein. This correlates to ACTN3 rs1815739 TT

In between those two genotypes is rs1815739 CT. More on what this all means and how to check your genetic data in the Genetic Variants section below.

As we age, we tend to lose muscle mass, starting around age 25. This muscle loss due to aging is called sarcopenia.

Other studies have replicated this finding. The slightly lower muscle mass in people with the ACTN3-deficiency variant likely leads to less load-bearing activities daily.[ref]

Muscle tissue can function aerobically, burning glucose with plenty of oxygen, or function anaerobically, relying on lactic acid. Anaerobic respiration is quick and doesn’t need oxygen, but it also doesn’t produce as much ATP.

Discovered through mouse models and human testing, the ACTN3-deficient genotype shifts the muscles towards more aerobic metabolism, which may benefit endurance athletes.[ref]

What do research studies show on ACTN3?

There are tons of research studies on this gene, and most of the initial studies focus on the connection with athletic performance.

Studies on ACTN3 in bodybuilders and performance athletes: Sprinter Genes

ACTN3-deficiency and rhabdomyolysis risk:
People with the ACTN3-deficient genotype are also about three times more likely to have exertional rhabdomyolysis, a serious (and fairly rare) condition where the muscles break down. This death of muscle tissue causes the release of protein into the bloodstream, affecting the kidneys.[ref] 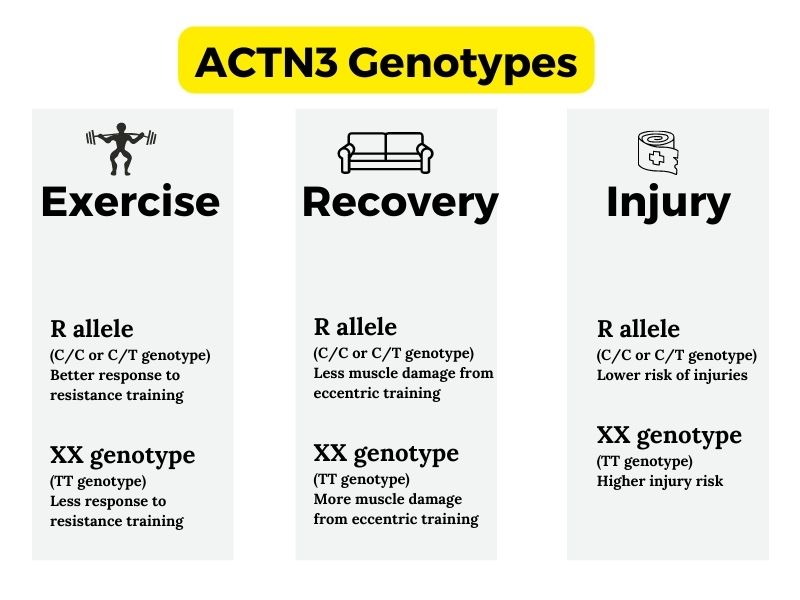 While most studies don’t find a huge difference in people between having one copy of the deficiency allele (CT) vs. having two copies of the normal allele (CC), animal studies show a minor difference. Essentially, lab mice are a lot easier to control the variable for and see exactly what a gene variant may impact.

Why is the ACTN3 variant so common? Cold tolerance…

The frequency of the ACTN3-deficiency genotype varies by population group, with up to 25% of Caucasians being deficient compared to less than 1% of some African population groups.

While it seems that having the active ACTN3 gene would give an adaptive advantage for speed to our human ancestors, evolutionary biologists theorize that there must be a reason such a high percentage of some population groups carry the ACTN3 deficiency genotype.

The answer to this question may lie in cold adaptation. New research shows that as our human ancestors migrated north out of Africa and the Middle East, there was an increase in the percentage of people who were ACTN3 deficient.

Researchers recently showed that people with the ACTN3-deficient (TT) genotype are better at maintaining their core body temperature in the cold.[ref]

The study involved healthy young (18-40) males. The men were immersed in cold water to lower their core body temperature to 35.5°C – or for 120 minutes, whichever came first. The number of participants who maintained their core temperature above 35.5°C for 120 minutes of cold water immersion was calculated. Individuals with ACTN3-deficiency were twice as likely to complete the 120 minutes vs. people with ACTN3 intact (69% vs. 30%). The researchers also found that people with ACTN3-deficiency maintained body temperature without using up as much energy.[ref]

What is going on with the ACTN3 muscle type and cold? The researchers showed that the increased amount of slow-twitch muscle fiber increased heat production without shivering as much (and thus used less energy). While this is a nice advantage for adults in cold climates, it may be that the biggest driver of the mutation increasing in population groups is that it confers a survival advantage for infants in cold weather.

How common is the ACTN3 variant?

There are big differences in the prevalence of the ACTN3 variants based on ancestry.  For example: 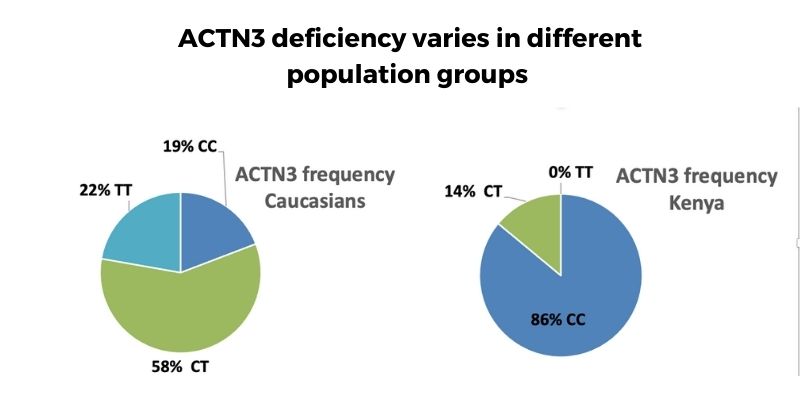 What should you eat with the ACTN3 gene variant?

A study of Brazilian runners looked at the interaction between the ACTN3 gene and pequi oil supplementation. Pequi oil is rich in carotenoids (provitamin A and lycopene – antioxidants) and consists mainly of palmitic and oleic fatty acids.

The researchers compared the athletes’ baseline metabolite measurements with the results after two weeks of supplemental pequi oil (400 mg/day). Creatine kinase, which normally rises after exercise, indicating muscle damage, was reduced after the antioxidant supplementation. The ACTN3-deficient athletes had significantly lower creatine kinase values after antioxidant supplementation than the athletes carrying the functional allele.[ref]

The pequi oil research indicates that antioxidant supplementation may be more effective for the ACTN-3 deficient genotype.

A recent study found that people who grind their teeth (bruxism) and also have the ACTN3 functional allele (CC) are likely to have larger jaw muscles than patients without the functioning ACTN3 (CT and TT). [ref]

BDNF supplements, genetics, and boosting cognitive function
The amount of brain-derived neurotrophic factor that you produce is partly due to genetics.

Heat Shock Proteins: Cellular Resilience
Heat shock proteins are activated by cells in response to a stressful condition, such as exposure to high heat. Learn more about the essentials of heat shock proteins, including how to activate them and the genetic variants that impact how well they work.

Athletic Performance Genes
If you are at the top of your sport and looking to optimize, genetics does come into play with muscle composition and endurance.  Check out this article on other genetic variants that also impact athletic performance.

Sore Muscles – AMPD1 Deficiency
Do you end up getting sore after pretty much every workout at the gym? It could be that a deficiency caused by this AMPD1 genetic variant is the cause.