I’ve been fascinated with the Klotho gene for a while now, partly because it has a cool name. It gets its name from one of the Three Fates in Greek mythology who spins the thread of Life. Klotho (or Clotho) was responsible for the thread of life for all mortals, when they were born and when they died. As you will see, this aptly named gene is intertwined with lifespan.

What does the KLOTHO gene do? 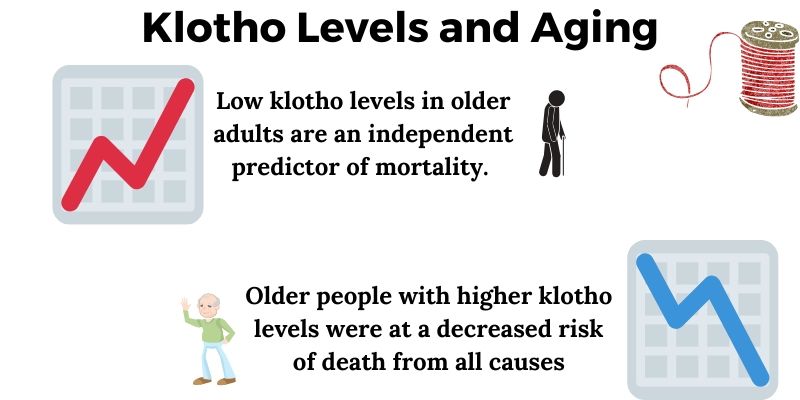 Klotho, found in the cerebrospinal fluid, plasma, and membranes, is involved in maintaining calcium homeostasis (kidneys) and controlling insulin and insulin-like growth factor-1 (IGF-1). It is mainly found in the kidneys and the brain. Klotho also causes increased production of SOD (superoxide dismutase) which is an important intracellular antioxidant. [ref][ref]

All of these things – calcium regulation, insulin, IGF-1, and oxidative stress – are important in aging. Klotho weaves them all together (yes, another ‘thread’ pun).

Let’s put that into context. Everyone knows that uncontrolled high blood pressure will kill you, right? A big study that followed participants for almost 20 years found that people with uncontrolled high blood pressure had an increased all-cause mortality risk of 69%. [ref]  Compare this to the low klotho level correlating to a 78% increase in mortality…

To clarify, does it mean low klotho levels are more predictive of mortality than high blood pressure? In some ways. But  –  klotho also ties into cardiovascular function through the regulation of calcium and is thus interconnected to the mortality risk. [ref]

There’s more to aging than death…

Associations exist between klotho levels and with the ‘signs of aging’ or ‘aging faster’.

In studies, researchers are looking at cognitive impairment, cardiovascular disease, kidney stones, cancer, and longevity to determine the effects of klotho levels.

The studies on how klotho levels influence cognitive decline or dementia seem to have conflicting results.

A study looked at older adults (Caucasian population) who carried the genetic variant associated with increased klotho in comparison to a similar group without the klotho variant. They found that the KLOTHO variant carriers had increased brain volume in a prefrontal cortex region. The variant carriers (more klotho) also had a better executive function, which included better working memory and processing speed. [ref]

Animal studies are better able to define the function of this gene. Researchers eliminatee the klotho gene in mice during development.The results show that the gene is important in brain development and myelination of the neurons. [ref] Decreased klotho in mice causes cognitive impairment. [ref]

Klotho isn’t all in your head…

This is the main klotho variant studied for longevity:

Other klotho variants have been associated with increased/decreased risk of kidney disease and heart disease:

Cordyceps mushroom extract is available as a powder, making it easy to add to any beverage.

Exercise increases klotho: A study on sedentary middle-aged adults found that exercise (moderate, high intensity, or high intensity plus electromyostimulation) all increased klotho plasma levels. There was no difference between the types of exercise. So get active to increase klotho. [ref][ref]

LONGEVITY AND GENETICS: FOXO3, CETP, IGF1, AND MORE
Several genes have been identified as “longevity” genes. The specific variants of these genes present connections to an increased likelihood of living to be 100 or more. And… more importantly, these particular genetic variants show links to a longer ‘healthspan’.

TELOMERE LENGTH: HOW YOUR GENES AFFECT TELOMERES AND AGING
Telomeres can be found on the ends of all of your chromosomes and located in the region of the repeated nucleotides (the A, G, and T’s). They cap off the end of the chromosomes, protecting the nuclear DNA during replication before cell division.