Color TV has made us fat! Nope, not the commercials advertising fast food at night, nor the fact that we are laying on our couches watching those commercials. The flickering blue light pouring out of almost every window in the neighborhood each evening is fundamentally changing our biology.

My argument goes as follows: obesity started to rise right around 1980 in the US, which coincides with color TV’s being in the majority of homes in the US. Every good argument needs data to back it up, so here is a nice chart from the National Institute of Health webpage showing the increase in obesity and extreme obesity starting just before 1980 in the US: 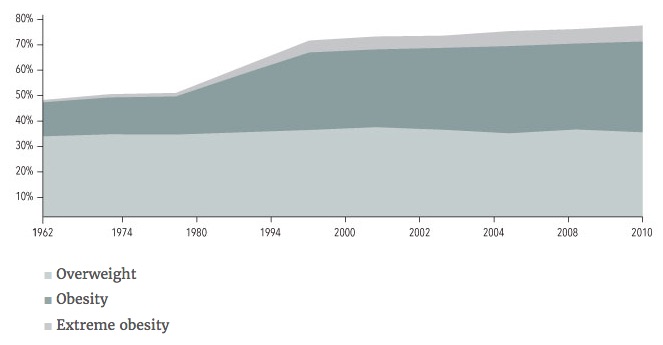 Yes, I am being a bit sarcastic here with my broad, sweeping statements and reckless use of a chart, but stick with me as I explain how melatonin is made (including why MTHFR may affect melatonin production). I’ll also explain how artificial light at night decreases the production of melatonin — and how all of this ties into negative health consequences, including weight gain.

When you start looking at the increasingly strong evidence that blue light at night is messing us up, it starts to make sense that color television sets pouring blue light into our living rooms each night would affect the population as a whole. Currently, people’s exposure to more blue light at night than ever before comes from our phones, tablets, and CFL or LED lights.

There is actually quite a lot of evidence that light in the evening and at night, especially in the blue wavelengths, causes a disruption to our body’s natural circadian cycles. This disruption can cause weight gain as well as more serious metabolic issues. Here are just a few studies from the past couple of years:

There has always been light at night from moonlight, candles, fire, or even incandescent light bulbs. But those light sources all have very little of the short wavelengths of blue light.

So what does melatonin do in the body?

Do you wonder why it is such a big deal for melatonin production to be delayed or decreased by light at night? It turns out that melatonin plays a role in several systems in the body.

Melatonin was first isolated from pineal glands in the late 1950s. Eventually, studies associated it with sleep and then followed synthetic melatonin’s first patent for its production as a sleep aid in 1995. Melatonin production is part of our body’s natural circadian rhythm: the level rises at bedtime, peaks around 3 am for most people, and then drops off sharply around 6 am.

Although most often thought of as the sleep hormone, melatonin has many more roles than “just” a good night’s sleep.

A recent review sums it up “The reduction in melatonin production, as during aging, shift-work or illuminated environments during the night, induces insulin resistance, glucose intolerance, sleep disturbance, and metabolic circadian disorganization characterizing a state of chronodisruption leading to obesity.”[ref]

How is melatonin made?

The synthesis of melatonin occurs in the body in a four-step process. It starts with the amino acid l-tryptophan, which we can get from a variety of foods. (This is where we get the idea that Thanksgiving turkey (high in tryptophan) makes you sleepy.) The tryptophan goes through a couple of steps to become serotonin. The result of this process lets serotonin become available for use as a neurotransmitter, or it methylates to become melatonin.

So there are quite a few processes in the body that can play a role in your melatonin levels, including eating adequate protein (tryptophan), producing the right amount of enzymes needed in the synthesis, and having adequate methyl groups available for the final step. When all of the processes work optimally, the lack of light at night initiates the final role in melatonin production.

Some people may be more affected by blue light in the evenings or low levels of light at night — depending on their genes. There is both a genetic component to the amount of melatonin created as well as the interaction with the environmental cues from light.

A small recent study looked at haplotypes (groups of variants) for the PER2 gene and found that the ancestral haplotype had less suppression of melatonin when exposed to bright light at night.[ref] For this study, 23andMe doesn’t include in their data most of the variants in the haplotype. Interestingly, only those with variants different than the ancestral type were affected by the bright light.

Another study looked at the PER3 gene and found a similar effect.[ref] Those with a longer version of the gene (PER3 5/5) had a significantly greater suppression of melatonin from blue light, while those without the insertion had less of an effect. Those with the PER3 5/5 genotype also were more likely to be morning types. Again, 23andMe data doesn’t cover this variation.

One PER3 variation covered in the 23andMe data is rs228697. The G allele is tied to evening preference, and the C allele is associated with a morning preference. While you might speculate that the C allele here is similar to the PER3 5/5 (morning type, greater suppression of melatonin by blue light at night), there haven’t been any studies that I can find to confirm that.

Melatonin signals through its receptors to downregulate insulin production at night, so it makes sense that a genetic variation in the melatonin receptor would be linked to the risk of insulin-related problems.

rs10830963 (G is the risk allele) linked to a higher risk of type 2 diabetes, gestational diabetes, and fasting glucose levels.[ref][ref] A study published in Cell Metabolism explains that this variant confers “increased expression of MTNR1B mRNA in human islets”.[ref] There is an excellent article on this variant at Dan’s Plan blog. One study notes: ” it is intriguing that we and others have found that a variant of the MTNR1B gene is associated with elevated plasma glucose levels, a reduction of the early insulin response to both oral and intravenous glucose, a faster deterioration of insulin secretion over time, and increased future risk of T2D”.[ref]

A recent randomized, cross-over trial found that “The concurrence of meal timing with elevated endogenous melatonin concentrations resulted in impaired glucose tolerance. This effect was stronger in MTNR1B risk-carriers than in non-carriers.[ref] Furthermore, eating late significantly impaired glucose tolerance only in risk-carriers and not in the non-risk carriers.”

Another recent study that looked at different types of diets (high fat/low carb, low fat, high protein, etc.) found that for those in the low-fat group, carriers of the rs10830963 G allele had a greater total reduction of cholesterol (LDL) levels.[ref]

The alkylamine N-acetyltransferase (AANAT) gene controls the rhythmic production of melatonin by the pineal gland.

Top 10 Genes to Check in Your Genetic Raw Data
These are 10 genes with important variants that can have a big impact on health. So check them out, cross them off your list if you don’t have them — and read the articles to learn more if you do carry the variant.

Circadian Rhythms: Genes at the Core of Our Internal Clocks
Circadian rhythms are the natural biological rhythms that shape our biology. Most people know about the master clock in our brain that keeps us on a wake-sleep cycle over 24 hours. This is driven by our master “clock’ genes.

Melatonin: Key to Health and Longevity
t seems like everything that I’ve written about lately has a common thread: melatonin. When I started weaving together all those melatonin threads, a big picture was revealed. You could say it is a… tapestry of health. Melatonin may actually be the key to health and longevity.