The Nrf2 (Nuclear factor erythroid 2–related factor) signaling pathway regulates the expression of antioxidants and phase II detoxification enzymes. This is a fundamental pathway that is important in how well your body combats oxidative stress and gets rid of toxins.

I like to think of Nrf2 as flipping the switch that calls up the phase II enzymes to take out the trash produced in the first phase of detoxification. Nrf2 is also important in clearing out the free radicals produced in cells as part of their normal production of energy.

Specifically, the Nrf2 signaling pathway can increase the production of GSTs, NQO1, UGTs, and SULTs. These are the body’s natural antioxidant defense systems, important in every cell, all the time — but especially important when your body is under stress from an increased toxic burden.

Chronic oxidative stress is part of the root cause of chronic diseases; thus, activating the Nrf2 pathway is thought to reduce disease risk for quite a few chronic conditions.

The Nrf2 pathway is important for protecting against:[ref]

How does Nrf2 work?

Normally, Nrf2 is located in the cytosol of the cell. It is hanging out, waiting to be needed.

When oxidative stress levels in a cell increase, Nrf2 moves into the cell nucleus, where the DNA is located. There it is able to bind to certain areas of the DNA to cause the cell to produce the innate antioxidants needed to decrease the oxidative stress in the cell.[ref] 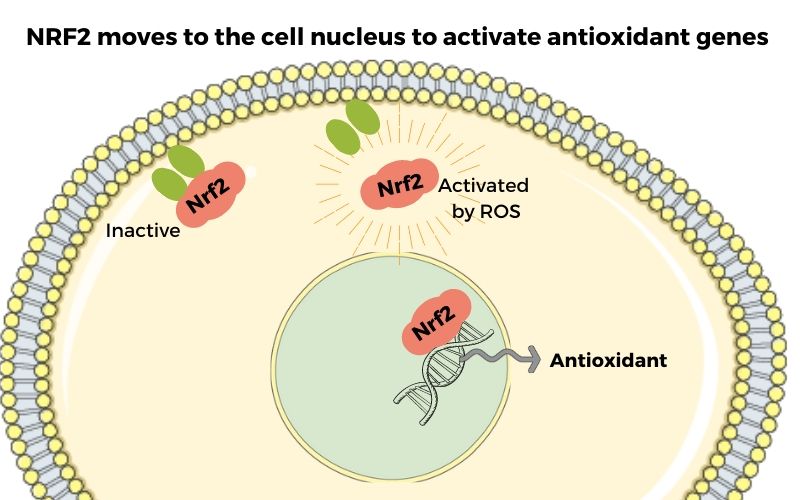 What is oxidative stress?

Oxidative stress in a cell is the imbalance between reactive oxygen species (ROS) and the cell’s antioxidant capability.

Too much ROS puts the cell in a state of oxidative stress, which means that damage can occur due to the excess of free radicals. This damage can take the form of damaged proteins, oxidized lipids, or mutations or breaks in the nuclear DNA. [ref]

Reactive oxygen species form in cells due to normal cellular processes, and your cells then balance this out with antioxidants.

The problems come when cells are exposed to environmental toxicants or other stressors that increase ROS. Sources of oxidative stress include radiation, environmental pollutants, carcinogens, and cigarette smoke.

We are all exposed to environmental toxicants daily from air pollution, food additives, microplastics, and personal care products.

Which genes does Nrf2 activate?

Normally, Nrf2 is present in the cytosol of cells and kept there by another protein (called Keap1). These two molecules hang out together while the normal cellular processes take place.

When oxidative stress is high in cells, Nrf2 disassociates from Keap1 and moves to the nucleus. In the nucleus, Nrf2 turns on certain genes for transcription.

NRF2 can also induce UGT1A1 and UGT1A6, which are important for making certain toxins, such as acetaminophen, more water-soluble for excretion.

In addition to activating genes that counter oxidative stress, Nrf2 also keeps inflammatory molecules in check.  NF-κB is an important regulator protein in the immune system.  When  NF-κB is not correctly regulated, the immune response can be overactive, such as in septic shock or autoimmune diseases.

Nrf2 acts to keep NF-κB in balance. Both molecules act in the nucleus to turn on other genes, and they interact to balance out proinflammatory and antioxidant responses.  [ref]

Variants in the NFE2L2 (Nrf2) gene are fairly common. Some variants increase Nrf2 pathway signaling and some diminish it. Research on these variants includes impacts on cancer prognosis, lung volume in smokers, and Parkinson’s disease relative risk.

A genetically increased Nrf2 pathway is associated with a decreased mortality risk in smokers, likely due to the body’s upregulated antioxidant defense protecting against the cellular damage from cigarettes.[ref]

If you don’t have the variants that increase Nrf2 – or if you are exposed to environmental toxicants  – you may want to look at ways to increase your Nrf2 levels.

Regular exercise upregulates the Nrf2 pathway.[ref] This is a free and easy lifehack – and one more reason to get outside and get active today.

Lithium Orotate + B12: The bee’s knees, for some people…
For some people, low-dose, supplemental lithium orotate is a game-changer when combined with vitamin B12. But other people may have little to no response. The difference may be in your genes.

How your genes influence BPA detoxification:
BPA, a chemical found in some plastics, has been linked to a variety of effects on people, including obesity, insulin resistance, and epigenetic effects on the fetus. Genetics plays a role in how quickly you can eliminate BPA from your body.