How does sniffing baby heads, gazing at puppies, and the desire to eat cookies all come together? With oxytocin.

Learn how this tiny neuropeptide influences reward systems in the brain and alters metabolism.

Simply put, oxytocin is a neuropeptide made in the brain and the periphery.

Breaking this down: neuro = nervous system — and — peptide = small molecule made up of amino acids

Oxytocin was first discovered more than a century ago in relation to giving birth. A bunch of oxytocin is produced during labor and breastfeeding. It is part of the parental bonding response with a baby.

Today, we know that oxytocin affects social empathy, sensitivity to reward, pair bonding, and more. It is often referred to as the ‘love hormone’.

What does oxytocin have to do with weight?

Appetite – that innate drive causing us to seek out food – is controlled in the brain. The brain controls not only the desire to eat but also the reward feedback that conditions us to seek out certain foods again and again.

This is where oxytocin comes into play as a neuropeptide. While not the only neuropeptide involved in controlling eating, oxytocin does play a role.

Research shows that giving people oxytocin (intranasal spray) before a meal will decrease the amount eaten and how long the person wants to sit and eat. It especially decreases the consumption of sweet carbohydrates.[ref]

Most importantly (to me anyway), in one study, intranasal oxytocin administration reduced chocolate cookie intake by 25%.[ref]

When a person eats food, oxytocin is released in the brain in the region called the hypothalamus. This release of oxytocin occurs (at least in animal studies) with the consumption of sugar/carbs, but not necessarily when consuming just fat alone. So the brain lights up with oxytocin – yeah, sugar! – signaling that the food was an immediate source of energy. But the release of oxytocin then feeds-back to slow the appetite, decreasing the need to eat more.[ref]

How does intranasal oxytocin reduce weight?

Looking at the mechanism of action of oxytocin may give us more insight into for whom oxytocin would work best – as far as weight loss goes.

Keep in mind that these studies are on administering oxytocin via a nasal spray, usually prior to a meal.

Essentially, the brain is receiving a signal that all is well and glucose has been consumed — before the food is actually consumed.

Animal studies show that low oxytocin levels increase the consumption of sugar over the long-term.[ref] Sugar is one molecule that is highly rewarding to eat.[ref]

This isn’t all about appetite, though.

One change that intranasal oxytocin brings about is a decrease in blood glucose levels after a meal through an increase in insulin.[ref][ref]

Thus, oxytocin may be beneficial for people who are overweight and have higher blood glucose levels (e.g. pre-diabetic).[ref]

Another change that intranasal oxytocin causes is a decrease in cortisol, the stress hormone.[ref]

Thus, oxytocin may be more beneficial for people who stress eat or who have chronically elevated cortisol.

Researchers think that overall, oxytocin acts on impulse control circuitry to control overeating, especially for more palatable foods such as chocolate cookies. Significantly, oxytocin doesn’t seem to reduce other neuropeptides related to appetite, such as GLP1 or PYY.[ref]

In addition to decreasing appetite, animal studies show that oxytocin increases fat oxidation — the burning of fat for energy.[ref]

Here’s a quick overview of human trials on intranasal oxytocin for weight loss:

1) A study published in 2013 investigated 24IU intranasal oxytocin taken at every meal in healthy overweight adults. The results showed significant weight loss after 8 weeks in the oxytocin arm of the trial. Average weight loss was ~9 kg in the oxytocin group, compared to ~2kg in the placebo group.[ref]

Here are the results of that trial:

One thing to note from this trial on 8 weeks of oxytocin is that it seems to be much more effective in people who were at a higher weight to begin with.

2) A randomized, placebo-controlled crossover study of single-dose intranasal oxytocin (24 IU) in men examined the effect on food choice and calories consumed. The men were given double portions of breakfast food that they selected off a menu.  Oxytocin reduced both the calories consumed and the preference for high-calorie foods.[ref]

3) A 2016 study looked at oxytocin in conjunction with calorie intake in obese vs. normal-weight young men. The results showed: “Oxytocin markedly reduced hunger-driven food intake in the fasted state in obese but not in normal-weight men, and led to a reduction in snack consumption in both groups…”[ref]

What else is oxytocin being used for?

Research is ongoing for intranasal oxytocin for:

A link between oxytocin and diet:

Do you ever wonder what in our modern diet is driving obesity? Yes, there is an abundance of cheap, delicious food. But… there have been many periods in history with readily available and delicious foods.

A 2020 study in mice may point to one reason for the obesity epidemic that ties together changes in modern diet and oxytocin. The researchers fed mice diets containing different types of fat and found that soybean oil caused changes in the hypothalamus. Specifically, soybean oil reduced oxytocin in the hypothalamus but paradoxically increased plasma levels of it.[ref]

How does this tie in with the obesity epidemic? It’s speculation, but here is how the rise in soybean oil consumption correlates to the rise in obesity from the early 70s through 1999. 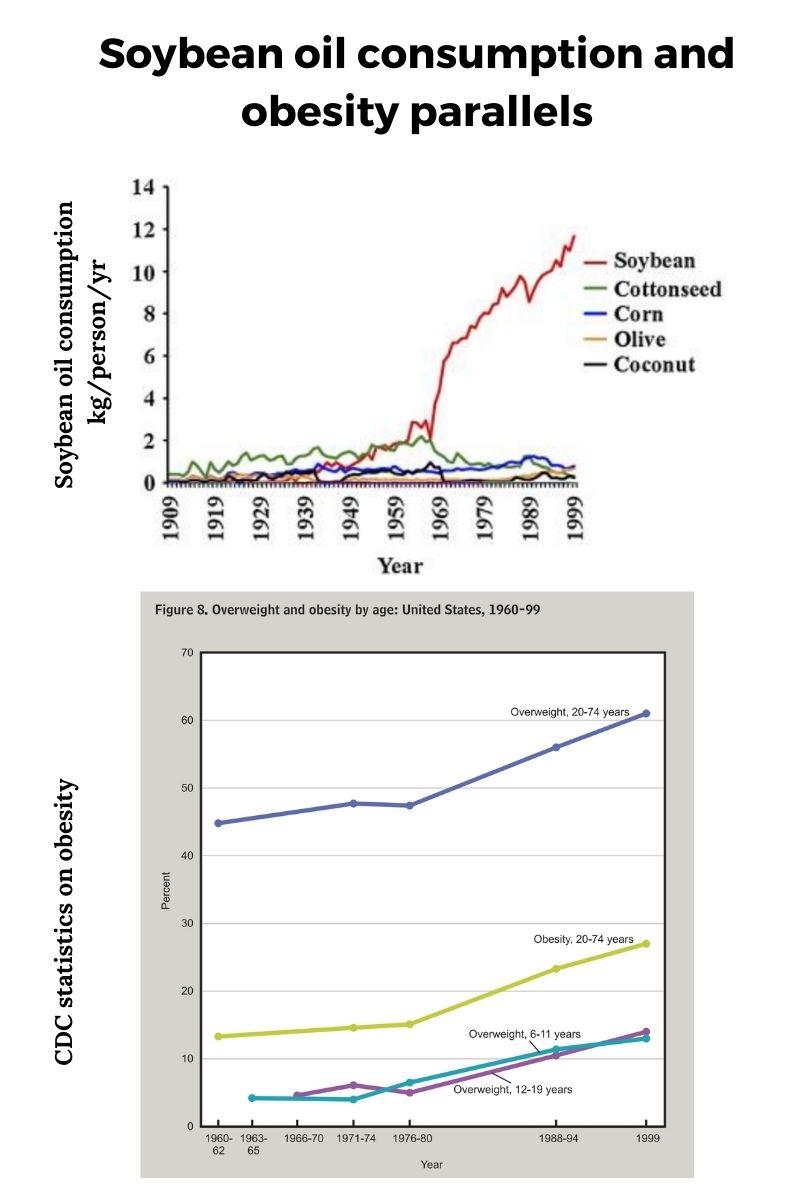 Genetic variants in the OXTR gene:

The first question, for me, is always: “Is it safe”? Numerous clinical trials on intranasal and IV oxytocin point to side effects being the same as the placebo, at least in short-term clinical trials.

Most clinical trials are using doses between 20 and 48 IU, with 24 IU being the most common.[ref]

Of note, long-term trials are needed to know if the weight loss with oxytocin rebounds after someone stops taking it. More clinical trials are underway, but no results have been posted yet.[ref][ref]

There are multiple forms of exogenous oxytocin:

Supplemental Melatonin
Melatonin is important for setting your circadian rhythm and for immune health. Dig into the details on melatonin supplements, scientific research, and more.

Quercetin: Scientific studies and genetic connections
As a supplement, quercetin has many positive health benefits. This article focuses on the results of clinical trials involving quercetin as well as linking to specific genetic topics. By using your genetic data, you can make a more informed decision on whether quercetin is worth trying.