Progesterone is an important hormone in women’s health, regulating menstruation, and vital for pregnancy. Additionally, it is important for everyone, men and women, for brain health.

This article explains the science (and genetics) behind progesterone — from how the body produces it to what exactly it does inside the cell. We’ll wrap up with genetic variants that influence your response to progesterone (both natural and exogenous).

What does progesterone do in the body?

Progesterone is a hormone made by both men and women. It plays a greater role in premenopausal women, and while that will be the main focus here, the same mechanisms take place for men to a lesser degree.

Progesterone also affects mood and the way people feel and behave. In general, progesterone reduces sexual desire in women as well as decreasing aggression and anxiety. When it comes to PMS (irritability, anxiety, and aggression), there is a lower-than-normal level of progesterone.

In the brain, progesterone metabolizes into allopregnanolone, which is neuroprotective in brain trauma.[ref]

How is progesterone made?

Progesterone’s generation in the body occurs during a multistep process that starts with LDL cholesterol.

The LDL cholesterol is taken into cells via cholesterol receptors, where it is transferred into the mitochondria to be converted into pregnenolone.

Pregnenolone is released by the mitochondria and can take two paths, depending on the organ where it is created:[ref] 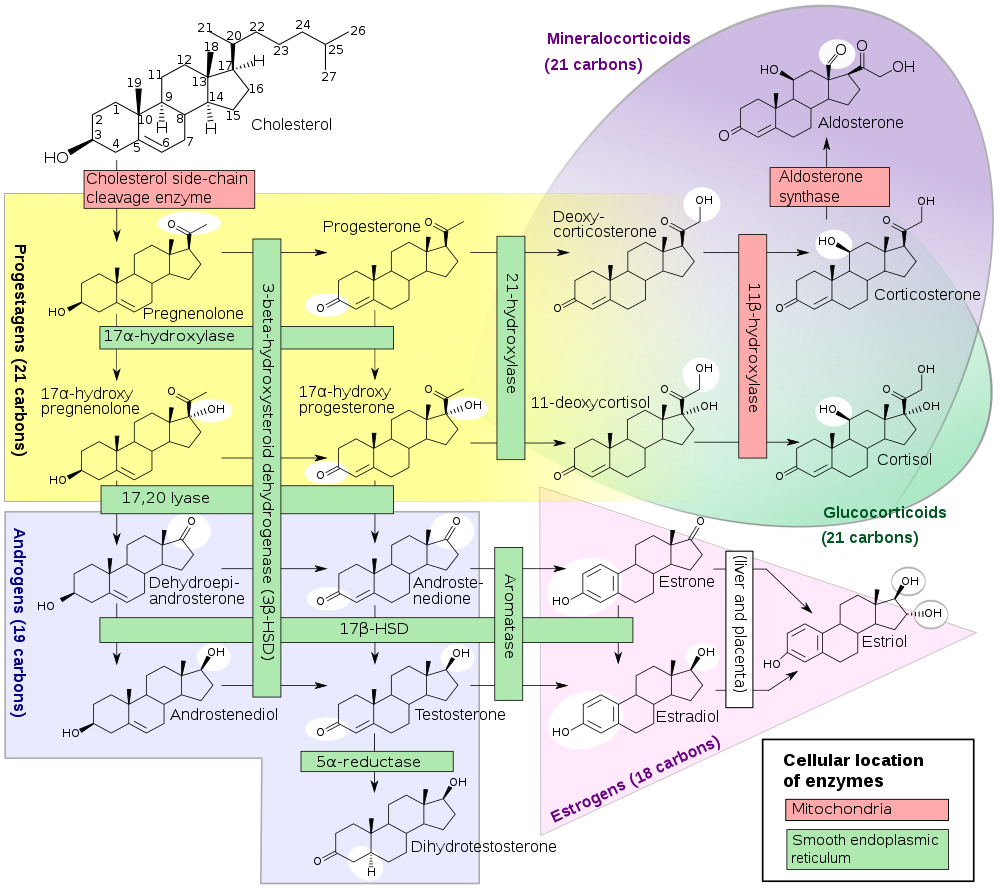 Mechanism of action for progesterone:

Let’s get into the details of how progesterone is working to turn on and off genes.

Progesterone is a lipophilic hormone, so it can diffuse across cell membranes. Within the nucleus of the cell, it attaches to progesterone receptors. These progesterone receptors come in a couple of different sizes and are denoted as PR-A and PR-B. The different flavors of receptors are active in different tissues. PR-A is important for ovulation in the ovaries, and PR-B is part of the development of mammary glands.[ref]

Once progesterone binds to the receptor, it will bind to certain spots on the DNA to recruit other proteins to the site. These regulatory proteins then activate or repress the transcription of certain genes.

It gets a little complex – but just think of it as progesterone causing other genes to get turned on (via the progesterone receptor). These other genes help prepare the uterus for pregnancy, like growth factors needed for regenerating the uterine lining.[ref]

Interestingly, other genes regulated by progesterone include a couple of important circadian rhythm genes.

Progesterone plays a role in preparing the uterus for implantation of the fertilized egg, and then if pregnancy occurs, progesterone levels rise over the course of the pregnancy and are essential for maintaining the pregnancy.[ref]

In a sense, progesterone is balancing out some of the growth that estrogen is promoting. Estrogen is stimulating the endometrium, and progesterone is coming along to regulate the gene expression of the fibroblast growth factors.[ref]

When not pregnant, menstruation occurs when progesterone levels drop at the end of the menstrual cycle. The black line in the image below shows how progesterone rises after ovulation (by 10 to 35-fold) and drops at the start of menstruation.[ref]

Like all hormones created in the body, progesterone needs to be broken down (metabolized) and eventually excreted or recycled.

The metabolites of progesterone can also play an active role in the body. For example, allopregnanolone is important in brain health.

DHP, the progesterone metabolite, is active in the brain as a neuroactive steroid that modulates the GABA-A receptors. (Read all about GABA here) Both progesterone and the DHP metabolite are important in the brain. Animal studies show that changing 5αR levels (via drugs such as finasteride) affects behavior and brain function.[ref]

Additionally, progesterone and synthetic progestin are metabolized through the CYP450 enzymes, a family of enzymes responsible for breaking down many substances made by the body as well as toxins and medications. CYP3A4 is the main route of metabolism[ref], and CYP2C19 also plays a role. 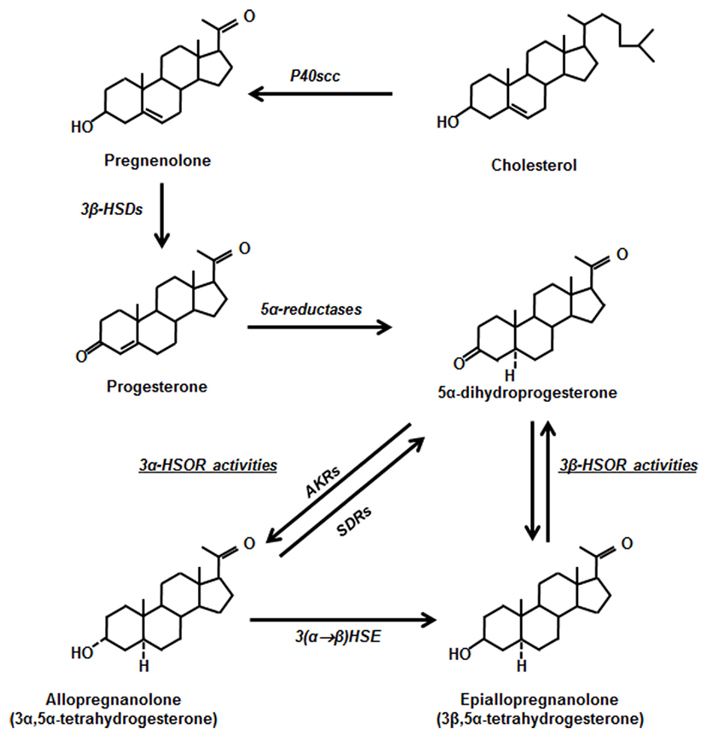 There are four main ways of getting additional progesterone (synthetic progestins or bioidentical) into the body:[ref]

Normally, progesterone rises to high levels during pregnancy, which is essential for maintaining pregnancy. Sometimes women with a high risk of miscarriage are given progesterone.

Blocking the progesterone receptor is a way to terminate a pregnancy during the first two months. Mifepristone, or RU-486, is the name of this drug.

Ella (ulipristal acetate) is another medication that acts on the progesterone receptor.[ref] Known as the morning-after pill, Ella is sold as a prescription emergency contraceptive in the US.

Synthetic progesterone medications known as progestins or progestogens are often used as birth control or for menopausal hormone therapy.

Etonogestrel, a synthetic progestin, can be implanted into the arm for 1-3 years of birth control. Some people carry an extra copy of the CYP3A7 gene. This gene codes for an enzyme needed for a baby’s development but usually switches off at birth. About 4% of the population carries an additional copy of the CYP3A7 gene (not covered by AncestryDNA or 23andMe data), which affects the metabolism of progestins (progestogens) as well as other steroid hormones. It can also affect the efficacy of etonogestrel as a birth control method.[ref]

Once progesterone has completed its function, the body breaks it down (metabolizes it) and then can excrete it. This is true for both progesterone created in the body and progesterone pills.

CYP3A4 gene: codes for a liver enzyme that is important in breaking down progesterone[ref] (and many other drugs)

The APOE E4 allele, which also increases the risk for Alzheimer’s disease, has links to higher levels of luteal phase progesterone.[ref] You can check your APOE status if you want to know by reading this article.

PMS, Genetics, and Solutions
A lot of women know the moodiness and brain fog that comes with premenstrual syndrome (PMS). The symptoms can range from simply feeling irritable and icky to being something that interferes with your normal lifestyle.