Can you be born a psychopath? The Encyclopedia Britannica explains that “…psychopaths are born, and sociopaths are made.”[ref] Does this mean that if you are born with certain genes, you are destined to be a psychopath?

Exploring the genetics research on psychopath genes paints a different picture. This article explains the differences in psychopath brains and the multiple genetic variants linked to psychopathy. Members will see their genetic data in the Psychopathy Genotype report.

Is there a psychopath gene?

Pithy sayings, such as ‘psychopaths are born, sociopaths are made’ do hold a kernel of truth…  However, they miss the mark in a lot of ways.

First, there is no single gene variant that causes psychopathy. Instead, quite a few fairly common genetic variants are linked to psychopathy and antisocial traits.

What is a psychopath?

We all have a mental picture of a psychopath – someone who lies without remorse, has no moral compass, and is cold and unemotional. They may be glib, smooth talkers who can lie their way out of a situation. Or they may just come across as emotionless and uncaring.

Depending on how researchers define a psychopath, the prevalence in the general population ranges from over 1% to as high as 5%.[ref]

Psychiatrists now refer to what we traditionally consider a psychopath as someone having severe Antisocial Personality Disorder (ASPD).

“1. A pervasive pattern of disregard for and violation of the rights of others, since age 15 years, as indicated by three (or more) of the following:

2. The individual is at least 18 years old.
3. Evidence of conduct disorder typically with onset before age 15 years.
4. The occurrence of antisocial behavior is not exclusively during schizophrenia or bipolar disorder.”[ref]

While psychopathy has a genetic component, your genes don’t predestine you to become a psychopath.

The estimated heritability of severe antisocial behavior disorder is about 50%.[ref]

Meaning psychopathy is about half genetic and half other factors. To clarify: Most of ‘heritability’ is the genetic variants or mutations you inherit, but heritability also includes epigenetics and in utero changes due to exposures before birth.

If heritability is half of the psychopathy, what is the rest?

Childhood abuse and stressors, parental controlling behaviors, and problems with managing impulsivity are intertwined with genetics.[ref]

Environmental factors, such as exposure to cigarette smoke toxins in utero or heavy metal exposure, may also combine with genetic susceptibility.[ref] 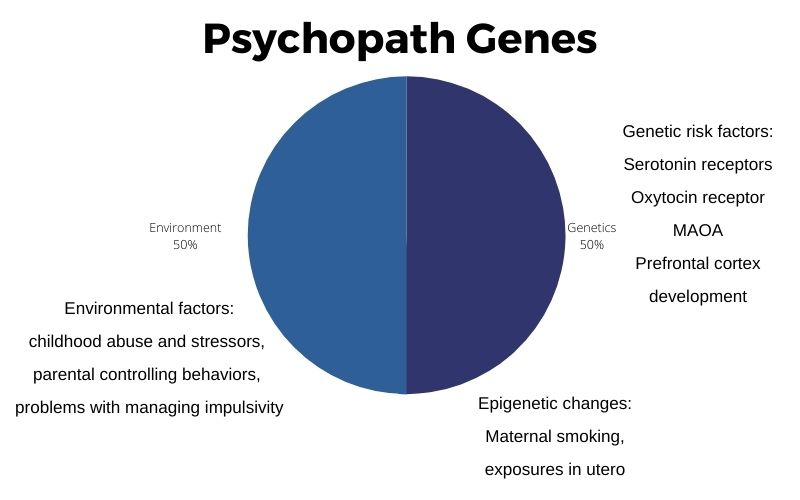 Intriguingly, studies of psychopathic brains show physical and physiological differences. And these differences may start during brain development.

Other researchers examined information on study participants in a twins study that had followed the sibling pairs for a couple of decades (birth through young adulthood). They found that showing an early disregard for others in toddlerhood is statistically predictive of specific psychopathy traits in young adults.[ref]

Changes in the brain:
MRI studies on callous, unemotional, antisocial children show a decrease in white matter and an increase in gray matter in their frontotemporal lobe (the location of emotion processing and moral decision-making). White matter in the brain develops as a person matures into adulthood, with the brain forming interconnections. Children who just exhibited antisocial behavior without being callous and unemotional don’t have the same alterations in white and gray matter in MRI images.[ref]

The latest research points to psychopathy or antisocial personality disorder as having neurodevelopmental disorder features.[ref] In other words, something didn’t develop normally in the brain. Researchers are looking at various regions of the brain during development and finding physical differences.[ref]

Other ways that gene expression can upregulate or downregulate include epigenetics.

Epigenetics is often likened to the ‘software’, while genes are the hardware. Essentially, the epigenetic process turns genes on and off for translation into proteins. Things that can cause epigenetic changes include severe childhood stress, exposure to drugs, and exposure to various environmental toxicants.

In recent studies, epigenetic changes in the way that certain genes express themselves show links to antisocial personality disorder. The findings include some of the same genes (below) that have genetic links to psychopathy, such as in MAOA (monoamine oxidase A) and serotonin receptor genes.[ref][ref] Epigenetic changes in how certain genes are expressed are linked to antisocial personality disorder.

In a 2019 study, researchers from Finland looked at the protein expression in neurons and astrocytes, comparing psychopaths to non-psychopaths. Interestingly, the researchers took skin cells from violent prisoners, nonviolent prisoners, and non-incarcerated people. In what almost seems like a bad sci-fi plot, the researchers used the skin cells to create stem cells and then differentiated those stem cells into neurons and astrocytes (brain cell types).

Researchers then looked at which genes were expressed differently in violent offenders’ neurons compared to control subjects. The results showed that ZNF132 was markedly upregulated in the violent offenders, and CDH5 was markedly downregulated. A pseudogene of unknown function, RPL10P9, had a 10-fold upregulation in the violent prisoner’s neurons.[ref]

ZNF132, a zinc-finger protein, is found throughout the body, including in the brain’s cerebral cortex.[ref] The gene encodes a protein involved in the transcription of other genes — essentially, it turns on other genes.[ref][ref]

CDH5 encodes vascular endothelial cadherin, an important protein in cell-to-cell adhesion. The protein is important for forming the lining of blood vessels and developing neurons in the brain.[ref]

Research is still ongoing regarding epigenetics, protein expression, and genetics. But the overall picture emerging shows that psychopathy is more than just genetic changes and that DNA alone cannot predict who will be a psychopath.

Members: Log in to see your data below.
Not a member? Join here. Membership lets you see your data right in each article and also gives you access to the members information in the Lifehacks sections.

Please note: Many of the variants below are fairly common, and you are likely to have some of them. Just because you have a genetic variant that increases the relative risk of psychopathy doesn’t mean you will be a callous, unemotional, immoral criminal. Instead, take this information for what it is — just one small piece of what makes you who you are.

MAOs break down dopamine, serotonin, adrenaline, noradrenaline, and histamine. Dopamine is essential in the brain’s reward circuits, and serotonin is involved in mood to some extent. Thus, altering the levels of these neurotransmitters can impact emotions, mood, and reward-based actions.

There are two forms of monoamine oxidase, MAO-A and MAO-B. Both genes are located on the X-chromosome, so males only have one copy of the gene.

Monoamine oxidase inhibitors (MAOIs) are prescribed to treat certain mood disorders, Alzheimer’s disease, and Parkinson’s disease. Inhibiting MAOA decreases the breakdown of serotonin, thus allowing it to stick around longer in the brain. It is a theoretical way that MAO’s impact mood.

While many studies have looked at the impact of variations in the MAOA gene on psychopathy or aggression, the results are often contradictory. In general, there seems to be a link between low MAOA, childhood trauma, and an increased risk of psychopathic traits.[ref] In people with severe antisocial personality disorder and low MAOA genotypes, there is a physical difference in how certain connections are made in different parts of the brain.[ref]

It may be a bit confusing since inhibiting MAOA – decreasing the enzyme function –  in adults with mood disorders via medications helps with mood (for some). The difference seems to be the level of MAOA available during brain development.

Knocking out the MAOA gene in mice causes them to exhibit increased aggressiveness – more biting and faster attacks on intruders. The researchers think this is due to decreased serotonin during development and early mouse childhood.[ref]

Genetic variants that reduce MAOA are linked to increased aggression – but only if coupled with childhood abuse or stressors.

For example, research shows women with low activity variants are at a higher risk of psychopathy than those with the high activity variant, especially with childhood abuse.[ref][ref]

Keep in mind that males only have one copy of the MAOA gene since it is on the X-chromosome; thus, genetic variants in MAOA have an all-or-nothing impact (no possibility of a moderating effect from a second allele for the gene) in males.[ref]

Several genetic factors, including a variable number tandem repeat in the MAOA gene (not in 23andMe data), impact MAOA activity.[ref]

Below is one variant that impacts MAOA activity.

A genetic variant in LINC00951, rs4714329, was identified in a GWAS (genome-wide association study) of criminal offenders with antisocial personality disorder. The variant increased the relative risk of ASPD diagnosis in the prisoners by 59%. The risk allele is also associated with antisocial features in non-criminal adults, but only if they had severe problems (trauma, abuse) in childhood.[ref]

An HTR2B gene mutation found almost exclusively in people with Finnish ancestry has strong links to aggression, impulsiveness, and antisocial personality disorder.[ref] The mutation causes this specific serotonin receptor not to function, but there are several different serotonin receptors with varying functions throughout the body.

The oxytocin receptor variants are fairly common and linked to social personality traits, including introversion and empathy. A meta-analysis combining data from 12 studies found several genetic variants in the OXTR gene linked to antisocial behavior.

Oxytocin is a peptide that is released in mothers during childbirth. It is essential in lactation and bonding with the baby. But this isn’t the only role of oxytocin. The peptide hormone is also released in the hypothalamus and other regions of the brain. It is important in social and emotional behaviors, group bonding, stress regulation, trust, sexual behaviors, and appetite.[ref]

SNAP25 gene: encodes a protein important in the way that the vesicles form the release of neurotransmitters in the neuronal synapses.

Research on ASPD and psychopathy clearly points to alterations in the brain due to both genetic susceptibility and maltreatment of some sort during brain development.

Is Anxiety Genetic?
This article covers genetic variants related to anxiety disorders. Genetic variants combine with environmental factors (nutrition, sleep, relationships, etc) when it comes to anxiety. There is not a single “anxiety gene”. Instead, there are many genes that can be involved – and many genetic pathways to target for solutions.

Serotonin: How your genes affect this neurotransmitter
Serotonin… a word that brings to mind a commercial that might show our happy brain neurons bouncing serotonin between them. There is a lot more to this molecule than most of us realize! This article covers how the body makes and transports serotonin and the needed receptors to complete its pathway.

Genetics of Seasonal Affective Disorder
Seasonal Affective Disorder (SAD) is characterized by recurrent depression with a change in the season, usually in fall/winter for most. Scientists think this is possibly due to an aberrant response to light – either not enough brightness to the sunlight or not enough hours of light. Your genes play a big role in this responsiveness to light.