Every year about 3 to 5 million people get the flu, and this results in about 250,000 to 500,000 deaths worldwide.[ref] One common prescription medication for the flu is Tamiflu, also known as oseltamivir. There are a couple of genetic variants that influence the way that oseltamivir works.

Influenza is an RNA virus and is divided into the genera: influenza A, B, and C. Influenza A is usually the worst form. Different strains of influenza A and B circulate worldwide each year.

Viruses are not classified by biologists as ‘alive’ because they cannot replicate outside of a host cell. First, they must enter a living organism (e.g. humans). Then they move into a cell via a cell membrane receptor. Finally, the virus hijacks the host cell’s ability to transcribe RNA (or DNA) into the proteins needed for the virus to replicate. After the virus replicates, the new viruses are released from the cell, moving on to infect other cells.

The influenza viruses are all enveloped viruses. This means that they are surrounded by a lipid envelope. The envelope is actually formed from the host cell’s membrane when the virus is released after replicating in the cell.

Sticking out of the surface envelope of the flu virus, there are two types of glycoproteins. One of these proteins, called neuraminidase, is used by the replicated virus to cause the release out of the host cell. Inhibiting neuraminidase, therefore, stops the release of the replicated viruses and decreases the rate at which it can spread in the body.[ref] 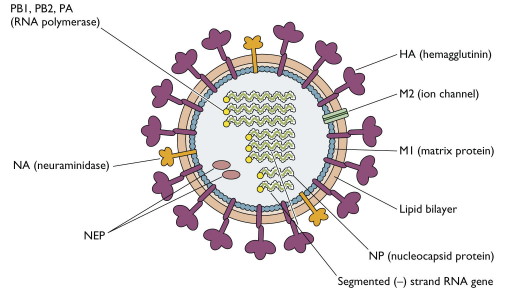 Tamiflu is a neuraminidase inhibitor

A small minority of people may have significant central nervous system orneuropsychiatric-relatedd side effects from oseltamivir.  In Japan, it is now considered ‘counter-indicative’ to give oseltamivir to children age 10-19 due to concerns that it can cause abnormal behavior or sudden death. Causation has not been proven, though, according to other studies. The abnormal behavior seen in teens included neuropsychiatric adverse reactions such as hallucinations and psychotic symptoms as well as low body temperature.[ref][ref]

A Cochrane review found that there is a risk for QT prolongation (heart problem), psychiatric disorders, kidney problems, and high blood sugar with oseltamivir.  Animal studies back up a lot of these side effects and explain the mechanism of action for everything except for the metabolic effect.[ref]

Conversion into the active drug:

Oseltamivir (Tamiflu) is a prodrug that has to be metabolized by CES1 into the active drug in the body. Some people have genetic variants that decrease the function of the CES1 enzyme.

Women naturally seem to have greater CES1 activity than men, so the effects of the genetic variant may be intensified for men.

Viral Immunity: Your genes protect you
Your genetic variants shape your immune system and give you superpowers against some pathogens – and perhaps more susceptible to others.

Circadian Rhythm and Immune Response
Your circadian rhythm influences your immune response. Learn how this rhythm controls white blood cell production and why melatonin is important in protecting against viral and bacterial infections.