Research shows that about 60% of obesity susceptibility is due to genetic differences, and the FTO gene is one of the key genes that has been consistently shown to impact weight.[ref]

The FTO gene, or ‘fatso gene’, got its nickname because of its association with obesity. It was one of the first obesity genes discovered using genetic data from a large, multi-ethnic population.

This gene is way more than a ‘fatso gene’.  Recently, researchers have figured out what the FTO protein does, opening up a wide field of research covering everything from metabolic health to cancer.

This article digs into the current research on the FTO gene and then gives you some science-based options for controlling your weight if you carry the FTO genetic variant.

What is the FTO Gene?

The FTO gene was identified in 2007 in a genome-wide association study that looked at over 35,000 people to determine genes involved in obesity. [ref]

But… identifying the gene didn’t explain why it was so widely linked to higher BMI, as well as an increased risk of ADHD, depression, cancer, and dementia.

Recently, researchers discovered that FTO acts as an RNA demethylase. This means that the protein encoded by the FTO gene acts to regulate gene expression of other genes.

Quick background science:
I often explain that genes code for proteins, but that is an oversimplification that leaves out a few key pieces that you likely remember from high school biology.

Genes are segments of DNA that are transcribed into mRNA (messenger RNA). The mRNA leaves the nucleus of the cell and is then translated by ribosomes into the amino acids that make up the protein.

Not all genes in the nuclear genome get translated into proteins, and the process of managing which proteins are made is called the regulation of gene expression.

There are several ways that gene expression can be regulated in a cell:

The FTO protein acts on specific mRNAs to control whether they are converted into their proteins. Specifically, FTO works like an eraser and takes away the markers, called m6A, on mRNA that stops it from being translated. By erasing the methylation mark, the mRNA can be translated into the protein.

Keep in mind: The genetic variants in the FTO gene that are linked with obesity cause the gene to be more active or overly expressed. [ref] Thus, it is causing more of certain proteins to be created.

Let’s take a look at the research on the FTO gene – where it started and where it is today:

Overview of research on the FTO gene:

Prior to understanding the role of FTO as an RNA demethylase, a lot of research pointed towards the various pathways this gene touches upon.

All of these initial studies make sense when you look at how the FTO protein regulates the formation of other proteins.

More recent studies elucidate the role of FTO and show that it not only is important in weight, but it also plays a regulatory role in many types of cancer. In cancer, FTO  “regulates cancer stem cell function, and promotes the growth, self-renewal and metastasis of cancer cells.”[ref] (Perhaps this is one reason why obesity is a risk factor for cancer?)

FTO impacts a lot of genes:

To recap: FTO is a modifier and regulator of proteins, many of which have to do with growth — from embryonic development to the growth of fat cells or the growth of cancer cells.

Looking at the specific proteins that are impacted by FTO shows not only why it is associated with obesity, but perhaps explains why obesity is correlated with other diseases such as cancer, NAFLD, high blood pressure, heart disease, and more. [ref]

When it comes to metabolic regulation, FTO erases marks on the mRNA of FOXO1, G6PC, and DGAT2, increasing the expression of those proteins, which are all involved in glucose metabolism.[ref]

FTO also regulates ATG5 and ATG7, proteins that are important in autophagy and adipogenesis (formation of fat cells). [ref]

Please don’t get the idea that FTO is ‘bad’.  The FTO protein is essential and shouldn’t be eliminated. In a mouse model, researchers have shown that deleting the FTO gene decreases weight — but it also activates the HPA axis and induces anxiety in the mice.[ref]  Instead, there are pros and cons of higher or lower levels of the FTO protein, with lifestyle factors coming into play.

How common are these FTO variants that increase weight? 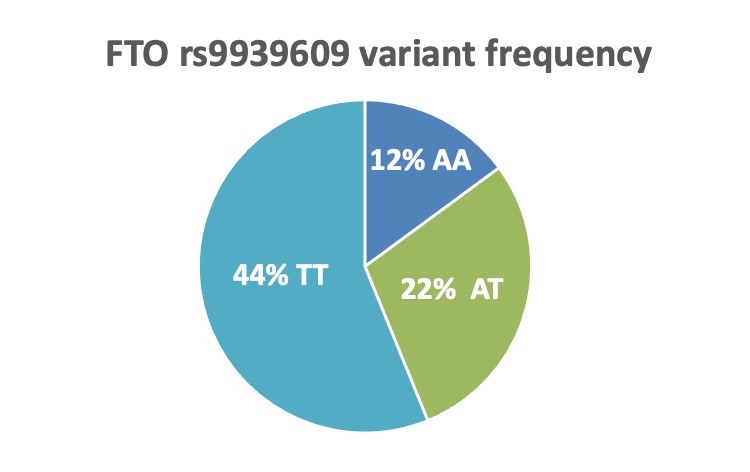 Other FTO variants:
The following FTO genetic variants haven’t been studied as extensively, but they may add to the impact of the above variants.

What is the best diet for the FTO variants?

Studies on this genetic variant are quite clear linking it to a higher BMI, but research shows a lot of contradictions when it comes to the best diet:

Instead of having a clear picture of a single ‘best diet’ for the FTO variant, there are some specific nutrients and lifestyle factors that interact to impact weight gain.

Get more active!  People with the highest levels of physical activity don’t seem to have as much of an impact from the FTO gene on their BMI.[ref] Even being ‘lightly active’ is better than being sedentary for people with the FTO risk alleles.[ref]

Look into “time-restricted eating”, which is simply restricting the number of hours you eat during the day. As a society, we tend to eat all day long and into the night. I recommend reading the book The Circadian Code, by Dr. Satchin Panda. The author is a circadian researcher who does a great job of explaining all of the latest research on meal timing and time-restricted eating.

What to eat – or not eat – with FTO variants:

Vitamin D Levels (preventing obesity in kids): Vitamin D levels in childhood may make a difference in weight gain, and children with higher vitamin D levels along with FTO variants were less likely to have increased weight than those with lower vitamin D levels.[ref]  So if your kids’ weight and the FTO variant worries you, send them outside to run around and play more often.

Vitamin A, retinoic acid:  One inhibitor of FTO is a vitamin A derivative, all-trans retinoic acid. It is used as a treatment for leukemia and acne as a prescription medication.  Animal studies show that even when serum vitamin A levels are normal, obese animals have greatly reduced vitamin A levels in their adipose tissue.[ref]

Does vitamin A increase all-trans retinoic acid enough to inhibit FTO? I don’t know. Vitamin A at high levels is toxic and can cause birth defects… so going overboard with this vitamin is obviously not a good idea. Ensuring that you get sufficient vitamin A may be important.

Betaine, a methyl donor: Betaine, a type of choline that acts as a methyl donor, has been shown in a meta-analysis to be effective for weight loss.[ref] Theoretically, this could be interacting with the FTO protein, which erases methyl groups off of mRNAs.[ref]

Rhein: a metabolite found in rhubarb, called rhein, is an FTO inhibitor. [ref][ref] I don’t think isolated rhein is available as a supplement, and if you eat too much rhubarb, well… you’ll find out what happens.

A recent animal study looked at the effects of a ketogenic diet on the expression of FTO in the brain. (Recap – variants that increase FTO expression are linked with obesity).  The study was unique in that it uses a true ketogenic diet instead of just a high-fat diet.  The results were that the ketogenic diet increased FTO expression in the hypothalamus via the elevated beta-hydroxybutyrate levels. The increase was transient and eventually, the FTO levels decreased through a negative auto-feedback loop.[ref]

MC4R- Growing Up Big Boned
There are several key players in our body’s regulation of hunger, satiety, and energy expenditure. Two pivotal hormones involved in our desire to eat are leptin and ghrelin. Within that leptin pathway, another key regulator of our body weight is MC4R.

Leptin Receptors
Do you wonder why other people don’t seem to struggle with wanting to eat more? Ever wished your body could just naturally know that it has had enough food — and turn off the desire to eat? You could be carrying a genetic variant in the leptin receptor gene which is linked to not feeling as full or satisfied by your meal.

Ghrelin: The hunger Hormone
Learn how your genes impact your baseline ghrelin levels and how this impacts your weight.